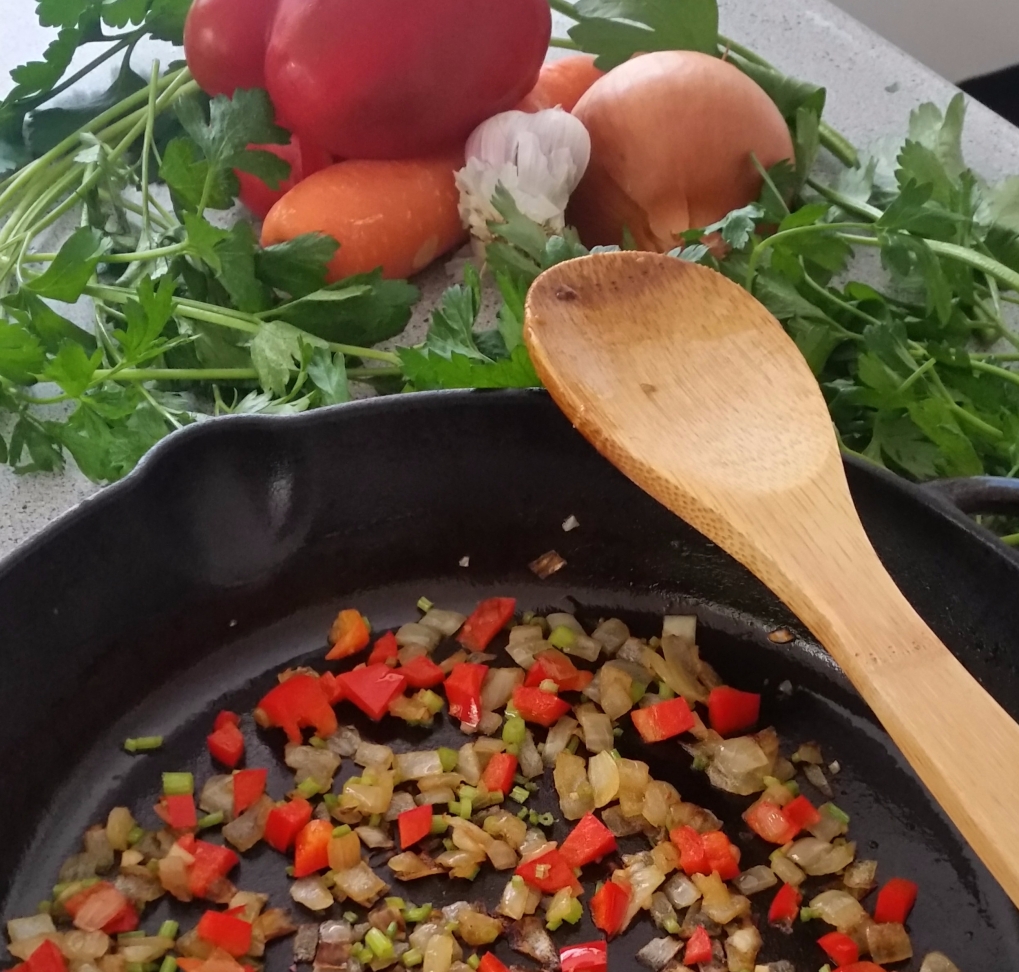 I learned to cook through the time honoured tradition of the skill being handed down by hanging out in the kitchen. It was a Master-Apprentice relationship and my mother, grandmothers and aunts were the first masters that I trained with. They were specialists in Italian, Ukrainian, German and Southern US cooking.

I later learned other styles, notably Mexican and various southeast Asian styles, by hanging out in the kitchen with multiple generations of families I was visiting. During these visits, owing to my ineptitude in their kitchens, I was often relegated to the task of chopping up the onion, garlic, celery etc. that was going to be the saute base of the dish. Preferable over there in the corner, out of everyone’s way.

There is a common thread across all these cultures; most dishes start from a foundation of vegetables and a dash of aromatics that are finely chopped, which is not really sauteed, but the goodness is sweated out of them into oil or butter. This sets up the flavour base for the whole dish and as Michael Pollan muses in Cooked it’s “about marrying lots of prosaic little things rather than elevating one big thing. In fact, it is the precise combination of these chopped-up plants that usually gives a pot dish its characteristic flavor and cultural identity.”.

It is the stage that supports the stars of the dish.

So it doesn’t matter what culture you are from, or the dish you are preparing, we all know the drill; you chop up some onion, garlic, maybe carrots or capsicum and celery. This luscious base has many aliases – mirepoix, sofito, Suppengrün, battuto, the Holy Trinity, and results in celery being in just about everything.

But this is the problem for migraine sufferers.

Up until now in my blog I’ve been focusing on artificial sources of nitrates and nitrites, but there are natural sources of nitrites and MSG. Some fruits and vegetables are so rich in them that they have to be removed from our diets. The big three, let’s call them the Unholy Trinity, are celery, rosemary and watermelon.

These three foods are the best natural fuels for the NO pathway that when overstimulated, may trigger migraines. Watermelon is the world’s best source of citrulline. Citrulline is bio-processed by the kidneys first to arginine and then nitric oxide, which is then dumped into the bloodstream looking for something to do. Hello blood vessels in the brain.

Celery and rosemary are very rich in nitrates and nitrites. So much so that they are touted as “natural preservatives” and are used by the food industry as such. In fact labeling can legally say no preservatives, so read the fine print and look for celery or rosemary extract.

Watermelon was easy, Stuart just avoids it when it makes an appearance as the most refreshing treat ever on a hot summer day. He’s also adept at picking it out of fruit salad when we are eating away from home.

Celery and rosemary continue to be an ongoing problem.

You see, nearly 7 out of 7 dishes I was making a week had celery in the base. This is even without considering the celery I was using when making stock. Each of these meals was adding huge amounts of nitrates and nitrites into our bodies.

I was in effect poisoning Stuart. Everyday I was dosing him up with nitrates and nitrites. It was like I was sneaking sugar into recipes and feeding it to a diabetic.

I had to fundamentally change the way I was cooking.

The stage for all my stars had to migraine trigger free.

Enter the Migraineur’s Mirepoix with it’s simple substitution of a small amount of finely chopped parsley or cilantro (corriander) stems for the celery, depending on the stars of your dish. 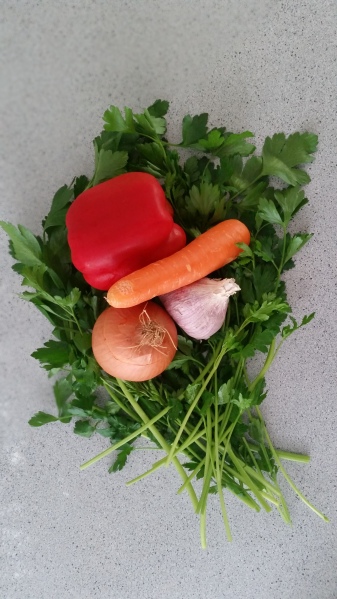 A migraine trigger free stage for you main ingredients to star on.

Credit: headachefreefoodie.com
Required skills: chop to a dice without losing a finger, cook in oil without burning.

Most cooks change up their mirepoix depending on the dish. Even so the ratios are generally:

For the Migraineur’s Mirepoix you are going to substitute a small amount of finely diced parsley stems for the celery at a ratio of ¼ part. The ratio is the same for coriander stems if you are looking for that flavour to be infused to the foundation.

The dice is about the same size as garlic.

In these photos you can see the approximate amounts that I use in a dish that serves two. When I measured it up there was:

½ cup of onion, ½ of a medium onion
¼ cup of capsicum, just a sliver off the capsicum
1 tbsp of parsley stems
1 tsp of garlic, one medium clove-is it my imagination or have garlic cloves gotten really big.

Everyone has their own way of doing the sweat. I like to soften the onions until tender of EVOO before tossing in the garlic. When the garlic has cooked enough that the aroma is no longer acidic and bitter in goes the capsicum and parsley stems.

So, have you ever found yourself unintentionally poisoning someone?

8 thoughts on “Migraineur’s Mirepoix: Setting the Stage for a Trigger Free Dish”