The baker Peter Reinhart has a most eloquent way of describing the greatest challenge for food creators, from home cooks to master craftspersons to commercial manufacturers. No matter how healthy it is, if it doesn’t taste good, we’re not going to eat it.

The act of tasting something is a chemical process between the environment and nerve cells. Humans have their taste receptors in our mouths. In other species, taste receptors can be found on appendages used for foraging, like in the feet of crabs or the antennae of lobsters. The essence of it is that the chemical constituents of food activate a nerve which then tells the brain yay or nay to the item.

Sour and bitter tastes signal not fit for consumption. Sour sensory cells are triggered by hydrogen ions from acidic foods. It tells the brain that this is a rotting, protein rich food that we probably don’t want to eat. Bitter is by far the most complicated taste in that it signals a poisonous plant. There are at least 35 proteins that trigger these sensory cells.

Sweet, salty and savoury (umami) all signal fit for consumption. The nerves are telling the brain to eat more of these items because it has something in it we need for life. Sweet sensory cells react to simple carbohydrates indicating a source of energy for the body. On the other hand, we are drawn to salts as we need to constantly restock our supply of sodium and potassium, needed for muscles to contract as we lose them through sweat. Glutamate, aspartate and selected ribonucleic acids react with savoury sensory cells to indicate a good source of protein.

So if we want something to taste good we just need to emphasize the sweet, salty and/or savoury flavours.

Glutamate is a fundamental amino acid for life. It is highly conserved, found in everything from bacteria to humans, functioning in intercellular communication within and between species. It is the primary trigger of the savoury taste sensors because it is so important for life.

Glutamate activated nerves signal good taste because it is healthy, excellent for when we were hunter gathers. Being able to identify good sources of protein by taste is still incredibly useful for those one billion people who still have low food security. But for those of us with ready access to energy rich, tasty foods (if you are reading this blog you fall into this category) our taste for savoury has resulted in nutritionally based diseases such as obesity and diabetes. In the case of migraine sufferers too much glutamate pokes the sleeping migraine beast into action. 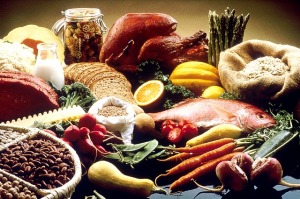 There are lots of fresh foods that are frequently reported to be naturally high in glutamates. These generally don’t prose a problem for migraineurs. In fact, those who advocate the use of added glutamates to enhance flavour frequently tout these foods in a “hey, you eat tomatoes and don’t get a headache.” kind of way. So let’s look at the actual amount of available glutamate in these high glutamate foods.

Glutamate can be either bound or unbound (free) in foods. It is the free glutamate that is of concern because that is what is biologically available to the body. It’s as if nature knew that the signal itself could be toxic to the body. Here’s a handy table so we can compare the amount of bound to free glutamate in some whole foods.

What I see from this data is that some whole foods have a lot of bound glutamate, which signals to the taste receptors to eat it. But the actually glutamate available for biological processes is much, much less. 10 to 100 times less than the signal. Yes a tomato might be high in glutamates, but not very much of it is biologically available.

It’s a strong signal with a weak neurological reaction.

Over time humans have learned to recreate the savoury taste with a variety of sauces and cheeses. These are not whole foods, but created by humans through the process of fermenting whole foods with naturally occurring yeasts and bacteria. During fermentation the yeast and bacteria release the bound glutamates because high levels of glutamic acid increases their lifespan. Glutamate is life for them.

The biologically available glutamate is 10 to 50 times that of whole foods.

It’s a strong signal with a strong neurological reaction.

Migraine sufferers should use these sauces judiciously. When soy and fish sauce are simply used in the cooking process of a stir fry, grilling sauce or to finish off some meat or a dressing, they generally will not trigger a migraine as long as they are preservative free.

Long marinades, hours to overnight, of meats in theses sauces can trigger migraines. Similar to yoghurt and cheese, soy and fish sauces are living organisms of yeast and bacteria that have created them. The yeast and bacteria responsible for fermenting the soy and fish are ever present. When presented with some new fuel of bound glutamates in the meat you are marinating, they get to work. The longer you marinade the meat, the more glutamate they make available for themselves and you to consume.

During humanity’s collective quest to make healthy food taste better, someone figured out that if we go straight to the parties responsible for unbinding the glutamate from whole foods, we would hit the taste jackpot. An added bonus if we could concentrate them. Yeast extracts were born.

The Australian staple, Vegemite, has 1431 mg/100 g of available glutamate. Its British counterpart, Marmite, has 1960 mg/100g. That’s 100 to 1000 times the glutamate biologically available in whole foods.

It’s a strong signal with an immense neurological reaction.

The neurological reaction is more intense than the signal. Our sensory system is not tuned for this reaction. We do not sense it as a danger.

Recall that when the daily intake of glutamate is doubled it resulted in headaches in human trials. The headaches resulted from the activation of the nitric oxide (NO) pathway within the nerves of the brain to prevent damage from overstimulation from toxic levels of glutamate. Excess NO production is never kind to migraineurs.

You can easily double your normal intake of glutamate if you regularly eat foods with 100 to 1000 times the amount. A single well seasoned meal can can easily do this.

Grains and yeast were first combined by humans to make beer in ancient Egypt. This is a long fermentation. Around the same time we discovered that yeast and grains could be combined on a shorter fermentation cycle to create bread. In both of these processes the by products of yeast metabolism, alcohol and carbon dioxide to make the bread rise, are highly prized. It is only recently that we have discovered another by product of yeast metabolism, the freeing of bound glutamates, making beer and bread taste better.

Since then yeast extracts have crept their way into modern food production as a way to create flavour. Let’s look at bread as an example. 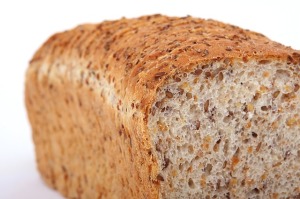 The baker Peter Reinhart has revolutionized modern bread making. He has made healthy whole grain breads palatable. If you are interested in hearing about how he does this you can check out his TED talk from 2008. He’s very upfront with how he makes tasteless, whole grains breads come alive with flavour. He uses two types to long yeast fermentations to create glutamates. More glutamate means more flavour.

He first discovered, like those inventors of Vegemite and Marmite, that the yeast and barley mixture used in brewing could be used in bread to give it flavour. He started to incorporate malted barley or malted barley flours. Second, these breads employ a long fermentation, generally overnight at lower temperature. According to Reinhart, hydrated dough should be slowly fermented to break down the grain to deliver flavour. The science underpinning his success is that slow fermentation gives the yeast time to release glutamates necessary for their survival. These same glutamates trigger a savoury taste.

Slow fermentation has become very popular within the food community because it creates flavour. Unfortunately for migraine sufferers too much of the molecule that creates flavour may trigger a migraine. This means that whole grain and sourdough breads are best avoided. Always check with your baker, or read the ingredient label, to ensure that no malted ingredients are used. 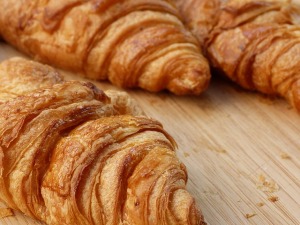 Time honoured, traditional techniques can also release glutamates. Our local boulangerie is well known in Sydney for their traditional techniques and ingredients. We get our bread there several times a week. One Sunday I picked up a croissant for Stuart as a special treat for breakfast. It was wonderfully light as air, while at the same time having a moorish buttery taste. They deserve their reputation.

Within an hour Stuart had a migraine.

I could not believe it was the croissant. Croissants are puff pastry; butter, flour, salt and water. Proper puff pastry takes days to make. The book of pastry is carefully taken out of the refrigerator, rolled and remade to create the layers of butter and dough. It is a labour of love.

The next time I was in the bakery I was able to get the ear of the baker. I explained my situation. He was very kind and walked me through how they make their puff pastry. They use the best butter and flour with the traditional technique of a small amount of yeast to keep it light.

As soon as he said yeast I knew that the croissant had been the source of the migraine. We had a good yarn about slow fermentation, yeast and glutamates. He was aware that in his sourdough and wholemeal breads these flavour creating reactions were taking place. It took the two of us to connect the dots on the croissants. The yeast had days to create break down the flour and create glutamate. Their croissants are off our list, however we still love their bread.

As always, whenever making lifestyle changes be sure and consult your healthcare team. Under no circumstances should you stop or start taking medication or supplements without their consent.

7 thoughts on “The Good, the Bad and the Ugly of Glutamate”