I love pizza. I grew up on homemade pizza. My mom would make the dough just after lunch and by dinner we would be diving into thick “Sicilian-style” pizza. The crust was very thick, like bread and it was covered with a thick sauce of tomato and sausage with the obligatory topping of mozzarella. We never ordered pizza or, deep gasp, had frozen.

Make your own pizza was a hot item at our house. Pizza was a natural to make with Stuart’s boys. We would start right after breakfast; as everything takes longer with a three-year-old. There’s nothing like a justifiable reason for throwing flour about. I would kid-wrangle the dough making and Stuart had the unenviable task of sweeping up the kitchen and dining room, usually just in time for round two; the making of pizzas. I sometimes think more flour ended up on the floor than in the dough.

The fact that we made the pizza dough and everyone then got to make their own individual pizza, just the way they liked it, made for the perfect pizza and movie nights.

The adult me prefers thin pizza with a modest amount of cheese. However, pizza can be a minefield for migraineurs. Everything from the cooking surface to the dough to the toppings has the potential to impart triggers into the dish. Pizza is very easy to make at home and here are my tips for keeping it migraine trigger free:

Pizza Stone – in his book Vegetarian Pizza James McNair recommends lining your oven with terracotta tiles just to make pizza. Bahahaha! Others swear by a dedicated outdoor pizza oven. Cha-ching! A simple investment of $20 on a pizza stone and paddle (to keep from burning yourself in an oven as hot as hades) will give you a very crispy crust. My tips are to (1) heat the stone in the oven for 1 hour prior to cooking pizza and (2) roll out the pizza dough onto some baking paper to pop onto the pizza stone. Baking paper is a necessity when kids are making their own. They enjoy making weird shapes, over topping them and experimenting with putting all the cheese on the bottom. They learn the hard way that the cheese on the top holds the pizza together after it collapses while cooking. Basically the baking paper keeps the porous pizza stone clean.

Flour – invest in some high protein,12-15%, flour. This will usually be called bread flour. Be sure that it does not include any migraine triggering malted flours. For years I used all purpose but everyone can tell the difference with the bread flour. The extra protein helps the crust hold it’s shape resulting in a “fluffier” dough.

Dough – use a fast fermenting process. There’s a fabulous trend to return to the overnight rising of pizza dough to create a chewy crust. Unfortunately long ferments give the yeast a chance to impart excess migraine causing glutamates into the dough. Use a recipe that rises in 2-3 hours like James McNair’s.

Toppings – fresh veggies, leftover meats and herbs create a trigger free pizza. Steer clear of small goods as they are laden with migraine triggering nitrates, even those that use celery extract as a preservative. Definitely no pineapple, not that it’s a migraine trigger, it’s just plain wrong 😉

So here’s my take on pizza dough and three things you can do with one batch. Enjoy my friends. 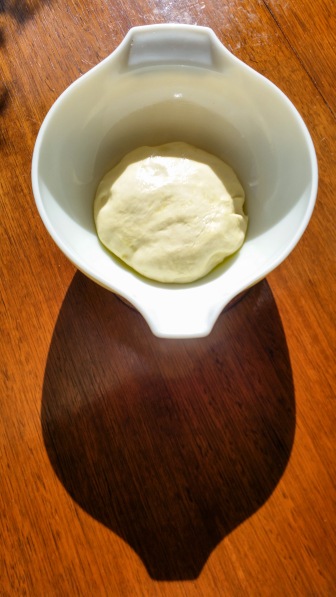 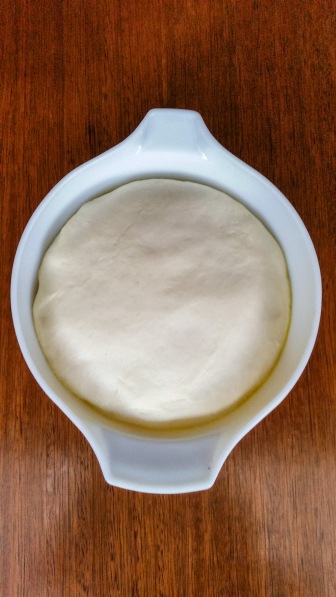 Homemade pizza guarantees that it is migraine trigger free.

Required skills: using a measuring cup instead of eyeballing it; not burning yourself in an oven preheated to the maximum temperature

This is a modified version of James McNair’s pizza dough. I make my dough by hand but he provides instructions for using various kitchen machinery. When there were five of us I would double the recipe. Now that there is just the two of us it is too much. So I divide the dough into quarters. One quarter is for some garlic pizza bread. I then divide the remaining ¾ in half. One half is for our main pizza and the other is made into breakfast scrolls for morning tea the next day.

The options for pizza, and their shapes, are only limited by the imagination. Here’s what is on our current playlist.

Toss the cheese, parsley and garlic together. Brushed rolled out pizza dough with EVOO and sprinkle the cheese mixture all over. Cook at the temperature for Hades for 8-12 minutes until bubbly and brown.

This cheese mixture is a good pizza base or topping.

Brush the pizza base with EVOO. Sprinkle the garlic cheese evenly over the base. Layer on the asparagus spears then the ham and thyme leaves. Crumble on the feta/chevre then sprinkle with grated mozzarella. Cook at the temperature for Hades for 15-20 minutes until top is bubbly and brown.

This recipe was inspired by Olives and Feta Cinnamon and Cocoa Bakers Swirl Bread. Normally for cinnamon scrolls you activate the yeast in milk, but her bread recipe used water. I’ve added 100% cocoa to my cinnamon scroll streusel as per her bread. Who doesn’t like a bit of chocolate for a breakfast treat? In case you don’t remember, there is no evidence that 100% cocoa is a migraine trigger. Non-migraine sufferers you could sprinkle chopped pecans over the streusel and it would be divine. This recipe makes two scrolls large scrolls which were so delicious that we forgot to take a photo of the end product 🤤

Make a streusel out of the cold butter, cocoa, brown sugar and cinnamon by rubbing together between your fingers until crumbs form. Spread softened butter across the pizza dough and then fold in half lengthwise. Press with a rolling pin and even out the edges. It should be a long thin, envelope shape. Spread the streusel on the dough. Roll up from the short end. Cut in half and place in buttered individual pie dishes. Cover with plastic wrap and refrigerate overnight. Take out in the morning and allow to come to room temperature; 1-2 hours. Brush with egg wash and bake at 180C (350F) for 25-30 minutes. Should be golden brown and sound hollow when you tap. 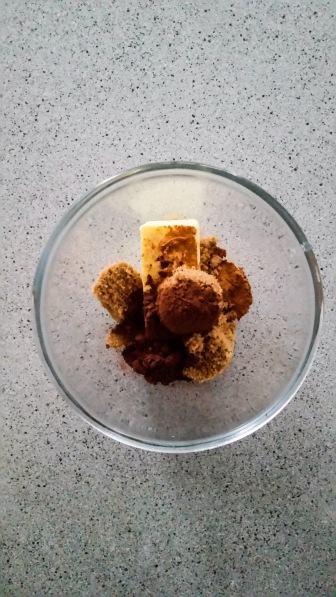 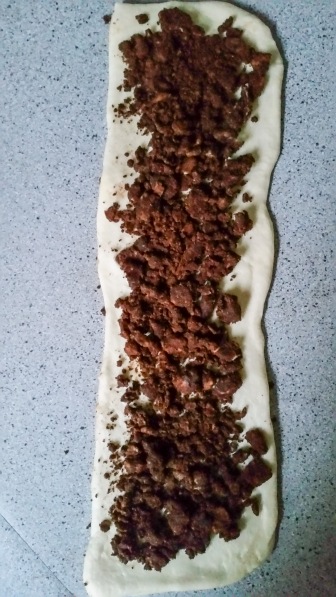 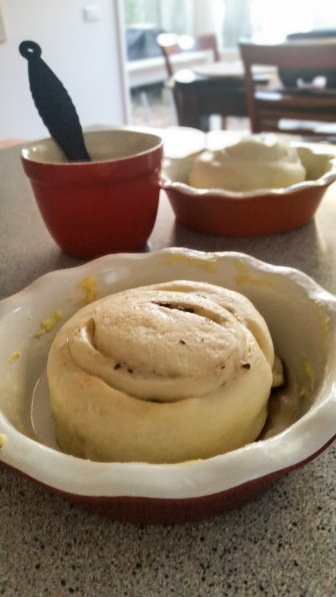 So my friends, what is your favourite type pizza? Are you a yay or nay for pineapple?

One thought on “Migraineur’s Pizza: Three Ways with Pizza Dough”